When drawing large scenes you will quickly run into performance issues. We can improve the performance by rendering only polygons that are visible to us. This is called Culling

There are three types of culling, Frustum Culling, Back/Frontface Culling and Occlusion Culling

When using frustum culling the renderer will only draw objects inside the viewing frustum. The viewing frstumm is a geometric representation of the area visible to the camera. This can be done by a simple AABB check. But it is possible for objects to be partially visible. These objects are cut into pieces in a process called clipping. Pieces that are outside the frustum are discarded.

When drawing 3D objects there is always a part of the object that is obscured by the front face. This part is called the backface and obviously does not need to be drawn. The backfaces are determined by the vertrex winding order. A side effect is that when your camera is inside a object it will appear as transparant. To prevent this you can either disable culling entrily or cull the front face if you only need to see the inside. This is the case with skybox’s. Back/Frontface culling is handled by most graphics API’s.

Keep in mind this proccess does not take other objects into account. We need Occlusion Culling to do that. 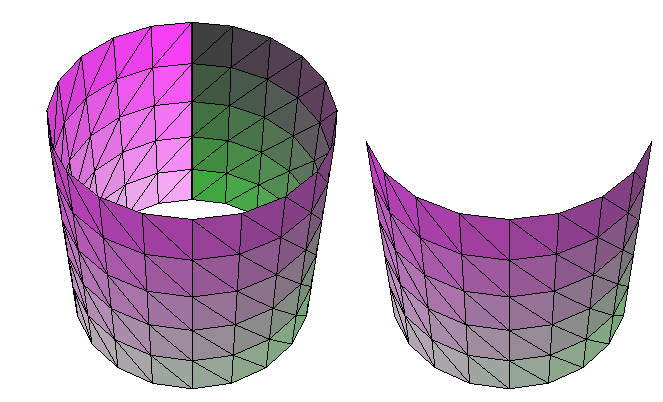 Probably the simplest type of culling. When a object it is so far away it only appears as a single object on your screen there is no reason to draw it so we dont’t. Or if a object is to close to the camera we do not always want to draw it. This is done via the clipping plane.

Objects that are obscured by other objects may need to be culled. This technique has probably the monst impact on your application. But not always the impact you want. If you have little geometry or are positioned in such a way nothing is getting culled it only decreases performance. Therefore Occlusion Culling should only be used in large scenes with lots of objects obscuring eachother. There are serveral approaces to this technique:

OpenGL has the ARB_occlusion_query extension which implements the occlusion query idea on the GPU and fetches the query results. Microsoft incorporated the same functionality in Direct3D 9

An occlusion query is fundemantally simpel. The GPU tells us how many pixels should have ended up visible on-screen. These pixels successfully passed various tests at the end of the pipeline such as the frustum visibility test, the scissor test, the alpha test, the stencil test and the depth test.

Here is how to process works: